Cinemark Holdings, Inc., one of the world’s largest and most influential movie theatre companies, today announced the grand opening of its Cinemark Jacksonville Atlantic North and XD theatre within the Atlantic North shopping center. The 14-screen theatre is the third Cinemark theatre in the greater Jacksonville area, and offers an elevated moviegoing experience to the eastern communities of the metroplex. Tickets are on sale now at Cinemark.com and on the Cinemark app.

“Cinemark is thrilled to be opening our third theatre in the greater Jacksonville area,” said Mark Zoradi, Cinemark CEO. “Movie fans can come and enjoy this upscale new theatre and everything it has to offer, including our fan-favorite Luxury Loungers and cutting-edge laser projection. We are proud to provide the community with an enhanced, larger-than-life cinematic experience that cannot be replicated at home.”

Cinemark Jacksonville Atlantic North and XD opens in time for some of the year’s biggest films, including Shang-Chi and the Legend of the Ten Rings, Malignant, Candyman, Free Guy and Paw Patrol: The Movie. Later next month, moviegoers will get the chance to see exciting new releases such as Dune, Venom: Let There Be Carnage, and the year’s most anticipated film, No Time to Die.

Advanced tickets for No Time to Die go on sale Friday, Sept. 17 ahead of the Oct. 8 release. Cinemark is bringing the film to fans early in its most immersive auditoriums, with special XD and IMAX screenings on Wednesday, Oct. 6 in select theatres across the country, including Jacksonville Atlantic North and XD.

The theatre has the best amenities Cinemark has to offer, including:

Moviegoers in the east Jacksonville area can get the most out of this upcoming theatre by joining Cinemark Movie Rewards, Cinemark’s two-tiered loyalty program that awards movie lovers with one point for every dollar spent at a Cinemark theatre. Members can redeem points for a variety of rewards, including movie tickets, concession deals, and movie merchandise. Members can join for free as a Movie Fan member, or upgrade to the Movie Club subscription program for just $9.99 per month, plus tax where applicable. Subscription members receive exclusive discounts and benefits including a monthly movie credit with rollover and no expiration.

The Atlantic North shopping center is comprised of two phases. Sleiman Enterprises, the developer, is currently leasing phase one and phase two of the property with many promising tenants interested in this development. The full Atlantic North development is over 170 acres including the multi-family property behind the shopping center and the undeveloped land. Phase two is home to Cinemark Theatres.

“It has been a pleasure working with Cinemark to bring a movie theatre to the community. Cinemark is the perfect addition to Atlantic North and will complement the property well. We are excited with the growth Atlantic North has experienced and look forward to bringing more shopping, dining, entertainment and other uses to this area,” said Toney Sleiman, principal at Sleiman.

Click here for photos and b-roll of the new theatre.

Headquartered in Plano, TX, Cinemark (NYSE: CNK) is one of the largest and most influential movie theatre companies in the world. Cinemark’s circuit, comprised of various brands that also include Century, Tinseltown and Rave, operates 521 theatres (323 U.S., 198 South and Central America) with 5,864 screens (4,426 U.S., 1,438 South and Central America) in 42 states domestically and 15 countries throughout South and Central America. Cinemark consistently provides an extraordinary guest experience from the initial ticket purchase to the closing credits, including Movie Club, the first U.S. exhibitor-launched subscription program; the highest Luxury Lounger recliner seat penetration among the major players; XD - the No. 1 exhibitor-brand premium large format; and expansive food and beverage options to further enhance the moviegoing experience. For more information go to https://investors.cinemark.com/

Sleiman Enterprises is one of Florida’s largest privately held real estate companies, owning and managing more than 5-million square feet of retail space in Florida and the southeast United States. The 65-year old company has grown into one of the country’s leading owners and developers of outdoor, open-air retail centers with properties throughout Florida, Georgia, Tennessee and Virginia. The company was founded by Eli and Josephine Sleiman in Jacksonville in 1955.

CINEMARK HLD. is part of a very strong bearish trend. Traders may consider trading only short positions (for sale) as long as… 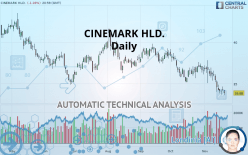