U.S. Stocks
Are you looking for opportunities in American stocks?
DISCOVER LONDINIA OPPORTUNITIES...
STATE OF THE MARKETS
Markets were spooked amid Fed’s decision
. Dow (-0.77%), Nasdaq (-0.24%), and S&P (-0.54%) including Russell (-0.23%) plunged into the red after Fed’s officials announced that they expect to raise rate by the end of 2023 instead of in 2024 as expected in March; in response to recent high inflation numbers. However, Feds also noted that employment still needs stimulus support and has not decided when to reduce its bond buying program. The 10Y yield benchmark jumped and settled around 1.58% on the news.

Crude futures closed lower on Dollar strength, around $72.15/bl, even after EIA reported a 7.36 million barrels reduction in US oil inventories. The sudden rise in yields sent gold spiraling close to $1,800/oz before bidders emerged and settled it around $1,811.95/oz.

In the FX space, Fed’s decision set Dollar to seize the helm of demand across all accounts horizons, while Aussie, Kiwi, Loonie and Euro were sent to the back burner. As Swiss lost bids in the short to medium term accounts, Yen advanced further in the demand territories. Demand for Sterling remains elevated.

OUR PICK – Clovis Oncology (CLVS, Nasdaq)
Buy when others are fearful. The Fed’s decision on Wednesday to expedite the timing for rate hike sent many stocks spiraling down, but some stocks managed to withstand the pressure and indeed closed with a buying signal. One of them is CLVS. After a successful rally back in February, now we believe it’s time to reload on this stock. A short term dive is probable, but medium to long term is a buy in our view.

Disclaimer:
This article is for general information purpose only. It is not an investment advice or a solicitation to buy or sell any securities. Opinions expressed are of the authors and not necessarily of MFM Securities Limited or any of its affiliates, subsidiaries, officers or directors. Leveraged trading is high risk and not suitable for all. You could lose all of your deposited funds.
This member declared having a buying position on this financial instrument or a related financial instrument.

CLOVIS ONCOLOGY INC. is part of a very strong bearish trend. Traders may consider trading only short positions (for sale) as… 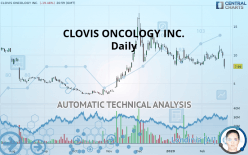