Six Flags Entertainment Company (NYSE:SIX), the world’s largest regional theme park company, is preparing to unleash its freakiest and scariest Fright Fest® ever. The viral event that took the nation by storm last year, the 30-Hour Coffin Challenge, is back with a vengeance with more prize money on the line and more reasons to fear. Thousands of would-be coffin dwellers across North America are already clamoring for the chance to spend what will feel like eternity inside dark, creepy, customized coffins. The last and final body to rise after the full 30 hours will receive a cash prize of $600, 2020 Gold Season Passes, Express Haunt Passes…and they may even get to keep the coffin.

Six Flags' 30-Hour Coffin Challenge is back and scarier than ever! Who will rise up in the end? (Photo: Business Wire)

“Six Flags’ Fright Fest is famous for shocking, no-holds barred, all-out terrifying Halloween experiences, and this year we are pushing the fear factor on what has become the most anticipated event in the country,” said Six Flags Chief Marketing Officer Brett Petit. “We expect tens of thousands of entries for the 30-Hour Coffin Challenge 2.0—and for the chosen ones, we plan to scare the living daylights out of them.”

When the sun goes down, all hell breaks loose during Fright Fest and there is nowhere to run and nowhere to hide. Armies of bloodthirsty zombies descend upon the midways, desperately searching for prey among the living. Fog-filled mazes transform park walkways into endless, winding miles of sinister sights and sounds. Scarier-than-life theming and innovative special effects combine to create movie-like haunted attractions brimming with the stuff of nightmares. Fright Fest is so scary it is definitely NOT recommended for children 13 and under after 6 p.m.

This year, Coffin Challenge participants will have to endure a spine-chilling list of grave-worthy elimination challenges, each one more difficult and menacing than the next. In order to stay in the competition, participants may find themselves sharing a coffin with scaly, slithering reptiles, munching on giant cockroaches or competing in the Newlydead Game.

Six Flags Entertainment Corporation is the world’s largest regional theme park company and the largest operator of waterparks in North America, with $1.5 billion in revenue and 26 parks across the United States, Mexico and Canada. For 58 years, Six Flags has entertained millions of families with world-class coasters, themed rides, thrilling water parks and unique attractions. For more information, visit www.sixflags.com.

Has the basic bearish trend slowed or is it lacking in power? The short term does not yet offer any information that would… 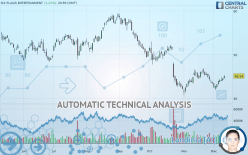