GeoPark Limited (“GeoPark” or the “Company”) (NYSE: GPRK), a leading independent Latin American oil and gas explorer, operator and consolidator with operations and growth platforms in Colombia, Peru, Argentina, Brazil, Chile and Ecuador, today announced the expansion of its portfolio with four new exploration blocks in the Reconcavo and Potiguar basins in Brazil.

GeoPark was preliminarily awarded the REC-T-58, REC-T-67, REC-T-77 and POT-T-834 blocks in the first cycle of the Permanent Offer held by Brazil’s National Agency of Petroleum, Natural Gas and Biofuels (ANP).

The acquired blocks represent low-risk and low-cost exploration acreage, strengthening GeoPark’s existing portfolio in the Reconcavo and Potiguar basins and adjacent to existing producing fields. The Reconcavo blocks are located nearby GeoPark’s recent light oil discovery, Praia dos Castelhanos, in the REC-T-128 block (GeoPark operated, 70% working interest). The blocks cover an area of 30,731 acres in aggregate (or 124 sq km). GeoPark has preliminarily identified multiple oil prospects and leads, based on existing 3D seismic and other relevant data. GeoPark will be the operator with a 100% working interest.

The Company has committed to invest a minimum of approximately $1.3 million in aggregate (including bonus and investment commitments) during the first exploration period of five years.

The winning bids are subject to confirmation of qualification requirements by the ANP.

Additional information about GeoPark can be found in the “Investor Support” section on the website at www.geo-park.com.

Forward-looking statements that appear in a number of places in this press release include, but are not limited to, statements regarding the intent, belief or current expectations, regarding various matters, including expected production growth, expected schedule, economic recovery, payback timing, IRR, drilling activities, demand for oil and gas, capital expenditures plan, regulatory approvals, reserves and exploration resources. Forward-looking statements are based on management’s beliefs and assumptions, and on information currently available to the management. Such statements are subject to risks and uncertainties, and actual results may differ materially from those expressed or implied in the forward-looking statements due to various factors. Oil and gas production figures included in this release are stated before the effect of royalties paid in kind, consumption and losses, except when specified.

Forward-looking statements speak only as of the date they are made, and the Company does not undertake any obligation to update them in light of new information or future developments or to release publicly any revisions to these statements in order to reflect later events or circumstances, or to reflect the occurrence of unanticipated events. For a discussion of the risks facing the Company which could affect whether these forward-looking statements are realized, see filings with the U.S. Securities and Exchange Commission.

Has the basic bullish trend slowed or is it lacking in power? The short term does not yet offer any information that would… 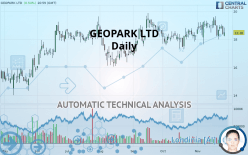