ALD is part of a very strong bullish trend. Traders may consider trading only long positions (at the time of purchase) as… 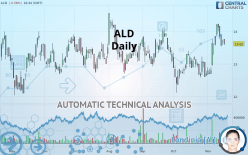