Yves Guillemot, Co-Founder and Chief Executive Officer, said “Our teams demonstrated incredible resilience during a challenging year, delivering amazing games and experiences. We also relied on a deep and diversified back-catalog which, again, outperformed our expectations and represented for the third consecutive year more than 50% of our total net bookings, progressively cementing the recurring profile of our business. Our assets have never been so strong.

Alongside these successes, we have pursued the transformation of our organization that we had initiated 18 months ago to ensure Ubisoft is positioned to meaningfully grow audience and recurring revenues over the coming years. We have also implemented profound changes to ensure the continued development of an inclusive working environment where our talents can thrive and deliver the game experiences that players will love and share.”

Frédérick Duguet, Chief Financial Officer, said “Ubisoft delivered a record year at the top and bottom lines thanks to an underlying performance that was significantly stronger than expected. This reflects the progress achieved in the diversification and recurrence of our revenues. We can rely on a deep portfolio of owned IPs, from our tentpole franchises, Rainbow Six, Assassin’s Creed, The Division, Far Cry, Just Dance, Ghost Recon and Watch Dogs to fan-favorite brands like For Honor, The Crew, Brawlhalla and Mario + Rabbids.

Our FY22 line-up will be the most diversified we have ever had, with ambitious post-launch plans as well as premium and F2P new releases. Our financial targets reflect these growth initiatives which are intended to generate significant value over the long term.”

Yves Guillemot added “We continue to build our portfolio, notably our biggest brands as demonstrated by the recently announced expansion of The Division’s universe. We also keep enhancing our technology assets, in particular our fast growing i3D.net hosting activity as well as Ubisoft Connect. Thanks to these expanding assets and a solid balance sheet, we are in a strong position to capitalize on the many opportunities offered by the market and are entering an exciting phase of our development.”

Note
The Group presents indicators which are not prepared strictly in accordance with IFRS as it considers that they are the best reflection of its operating and financial performance. The definitions of the non-IFRS indicators as well as a reconciliation table between the IFRS consolidated income statement and the non-IFRS consolidated income statement are provided in an appendix to this press release.

(1) Based on the consolidated cash flow statement for comparison with other industry players (not audited by the Statutory Auditors).

The Company is introducing its targets for 2021-22:

The top-line growth will be driven by both back-catalog and new releases. Back-catalog growth will be spurred by its underlying robust dynamic, by a significantly stronger release slate in 2020-21 than in 2019-20 and by bigger post-launch plans, more than compensating for the high comparison 2020-21 base resulting from the lockdown impact on overall engagement. Ubisoft also expects to release a solid and well-diversified line-up, including premium and F2P titles. The year will notably see the release of Far Cry 6, Rainbow Six Quarantine, Riders Republic, The Division Heartland and Roller™ Champions. Skull and Bones will now be released in 2022-23.

Transformation of the organization

Ubisoft continued to evolve its organization over the past 18 months to adapt to a fast-changing industry and to ensure its culture is stronger than ever. Some of the profound changes notably include:

Shares purchased from March 22 to April 9: Ubisoft Entertainment SA acquired 596,000 shares at an average price of €65.8 for a total amount of €39.2m which can be allocated to the stock-based compensation program or could be cancelled, as per the regulations in force.

Ubisoft will hold a conference call today, Tuesday May 11, 2021, at 6:15 p.m. Paris time/12:15 p.m. New York time.
The conference call can be accessed live and via replay by clicking on the following link:

Disclaimer
This press release may contain estimated financial data, information on future projects and transactions and future financial results/performance. Such forward-looking data are provided for information purposes only. They are subject to market risks and uncertainties and may vary significantly compared with the actual results that will be published. The estimated financial data have been approved by the Supervisory Board on May 11, 2021, and have not been audited by the Statutory Auditors. (Additional information is provided in the most recent Ubisoft Registration Document filed on June 5, 2020 with the French Financial Markets Authority (l’Autorité des Marchés Financiers)).

About Ubisoft
Ubisoft is a leading creator, publisher and distributor of interactive entertainment and services, with a rich portfolio of world-renowned brands, including Assassin’s Creed, Far Cry, For Honor, Just Dance, Watch Dogs, and Tom Clancy’s video game series including Ghost Recon®, Rainbow Six and The Division. The teams throughout Ubisoft’s worldwide network of studios and business offices are committed to delivering original and memorable gaming experiences across all popular platforms, including consoles, mobile phones, tablets and PCs. For the 2020-21 fiscal year, Ubisoft generated net bookings of €2,241 million. To learn more, please visit: www.ubisoftgroup.com.

© 2021 Ubisoft Entertainment. All Rights Reserved. Ubisoft and the Ubisoft logo are registered trademarks in the US and/or other countries.

Net bookings corresponds to the sales excluding the services component and integrating the unconditional amounts related to license contracts recognized independently of the performance obligation realization.

Non-IFRS diluted EPS corresponds to non-IFRS attributable net income divided by the weighted average number of shares after exercise of the rights attached to dilutive instruments.

Free cash flow corresponds to cash flows from non-IFRS operating activities after cash inflows/outflows arising on the disposal/acquisition of other intangible assets and property, plant and equipment.

Free cash flow before working capital requirement corresponds to cash flow from operations after cash inflows/outflows arising on (i) the disposal/acquisition of other intangible assets and property, plant and equipment and (ii) commitments related to leases recognized on the application of IFRS 16.

Cash flow from non-IFRS financing activities, which excludes lease commitments relating to the application of IFRS16 presented in non-IFRS cash flow from operation.

Breakdown of net bookings by platform

EXTRACTS FROM THE CONSOLIDATED FINANCIAL STATEMENTS AT
MARCH 31, 2021

Consolidated income statement (IFRS, extract from the accounts which have undergone an audit by Statutory Auditors).

Consolidated balance sheet (IFRS, extract from the accounts which have undergone an audit by Statutory Auditors)

*Shares of UCITS invested in short-term maturity securities, which do not meet the criteria for qualification as cash equivalents defined by IAS 7.

Consolidated cash flow statement (IFRS, extract from the accounts which have undergone an audit Statutory Auditors)

1 Consoles premium and free-to-play scope. Internal estimates.
2 Sales at constant exchange rates are calculated by applying to the data for the period under review the average exchange rates used for the same period of the previous fiscal year.
3 See the presentation published on Ubisoft’s website for further information on movements in the income and cash flow statement.
4 Based on the consolidated cash flow statement for comparison with other industry players (non-audited)

All elements being clearly bearish, it would be possible for traders to trade only short positions (for sale) on UBISOFT… 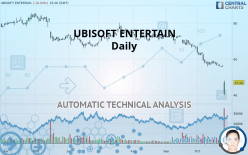