SILVER SPRING, Md. and RESEARCH TRIANGLE PARK, N.C., Feb. 4, 2020 /PRNewswire/ -- United Therapeutics Corporation (Nasdaq: UTHR) announced that on January 29, 2020, the United States District Court for the District of New Jersey issued a decision in favor of United Therapeutics and Smiths Medical ASD, Inc. denying the request for preliminary injunction sought by Sandoz Inc. and RareGen, LLC in pending antitrust litigation. According to the Court, "[Sandoz and RareGen] have not met their burden of demonstrating a reasonable probability of eventual success in the litigation." The unsealed opinion was just released by the Court.

In finding that Sandoz and RareGen failed to demonstrate they were likely to prevail in the litigation, the Court noted that Sandoz and RareGen "produced no evidence UTC's purchase of [the cartridges for the CADD-MS3 system] was motivated by or intended to forestall Sandoz's entry into the subcutaneous market." Rather, United Therapeutics made a significant investment under an agreement with Smiths Medical that ensured the CADD-MS3 pump would continue to be available to deliver Remodulin for a period of time after Smiths Medical announced discontinuation of the pump.

The Court noted that the agreements between Smiths Medical and United Therapeutics, which made more cartridges available than would otherwise exist, were in fact procompetitive. The Court's opinion noted: "The Court is persuaded from the wording of the original 2016 Pump Supply Agreement that UTC's concern was not keeping Sandoz out of the market for treprostinil, but rather with ensuring continuity of supplies of pumps and cartridges for its customers at a time when there were no other treprostinil competitor, and that the exclusive nature of this production agreement was contemplated from inception."

The Court also found that Sandoz "was aware or should have been aware of CADD-MS® 3 problems as early as May 2016." Yet Sandoz failed to take action to ensure delivery means for its own patients.

In addition to United Therapeutics' investment in additional cartridges, United Therapeutics continues to innovate and develop new and improved systems to deliver this therapy. If Sandoz and RareGen had taken the same care, they could have been able to serve their patients rather than resorting to litigation in an effort to remedy their own poor planning.

The Court also denied United Therapeutics' and Smiths Medical's motion to dismiss the entire action, so the case may continue to be litigated. Nonetheless, this decision is an important milestone in vindicating United Therapeutics' belief that the claims against it are meritless.

United Therapeutics Corporation focuses on the strength of a balanced, value-creating biotechnology model. We are confident in our future thanks to our fundamental attributes, namely our obsession with quality and innovation, the power of our brands, our entrepreneurial culture and our bioinformatics leadership. We also believe that our determination to be responsible citizens – having a positive impact on patients, the environment and society – will sustain our success in the long term.

Through our wholly-owned subsidiary, Lung Biotechnology PBC, we are focused on addressing the acute national shortage of transplantable lungs and other organs with a variety of technologies that either delay the need for such organs or expand the supply. Lung Biotechnology is the first public benefit corporation subsidiary of a public biotechnology or pharmaceutical company.

Statements included in this press release that are not historical in nature are "forward-looking statements" within the meaning of the Private Securities Litigation Reform Act of 1995. Forward-looking statements include, among others, statements regarding our efforts to defend a lawsuit filed by Sandoz and RareGen, the likelihood that we will prevail in the litigation, the ability of our business model to create value, our ability to sustain long-term success, and our organ transplantation research and development programs. These forward-looking statements are subject to certain risks and uncertainties, such as those described in our periodic and other reports filed with the Securities and Exchange Commission that could cause actual results to differ materially from anticipated results. All of these factors could have a material impact on how useful the final results will be to healthcare providers, and how they will be viewed by the FDA and other regulators. In addition, the forward-looking statements in this press release are qualified by the cautionary statements, cautionary language and risk factors set forth in our periodic reports and documents filed with the Securities and Exchange Commission, including our most recent Annual Report on Form 10-K, Quarterly Reports on Form 10-Q and Current Reports on Form 8-K. We claim the protection of the safe harbor contained in the Private Securities Litigation Reform Act of 1995 for forward-looking statements. We are providing this information as of February 4, 2020 and assume no obligation to update or revise the information contained in this press release whether as a result of new information, future events or any other reason.

UNITED THERAPEUTICS is part of a very strong bearish trend. Traders may consider trading only short positions (for sale) as… 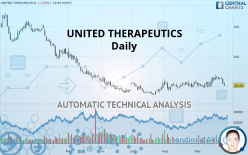