U.S. Stocks
Are you looking for opportunities in American stocks?
Discover Londinia Opportunities...
STATE OF THE MARKETS
Stocks rally continues as Powell holds dovish line.
US stocks continued their Monday’s rally, after Fed Chairman Jerome Powell testified to congress that the central bank will not raise rates before the employment sector is stronger. The late comments, pushed tech laden Nasdaq (+0.79%) to record high, while Dow (+0.20%), S&P (+0.51%) and the small cap Russell (+0.43%); all settled in the green as the 10Y yield dipped lower to 1.47% and Dollar (DXY) to 91.75 mark.

Crude was under selling pressure, as more than $740 million worth of block orders hit the futures market, after OPEC+ was rumored to raise production output. The black gold settled lower to $73.06/bl as New York closed. Meanwhile, gold closed lower around $1,778.52/oz, though bids were seen strong into the $1,780/oz.

King Dollar, Yen, and Sterling continue the lead in demand for medium to long term accounts after Euro was overbid by Loonie. Aussie, Kiwi and Swiss continue to be on offer. In the short-term term accounts, Sterling was sent to the back burner with Dollar, Swiss and Yen as Loonie, Kiwi, Aussie and Euro led the demand territories.

OUR PICK – GoPro Inc. (GPRO, Nasdaq)
Price pulled back as earnings declined. Go Pro was once the craze of markets as new drone technology made a debut in 2014. The stock climbed from $30 to almost $100 in only five months before the craze faded and earnings dictated that it can’t go anywhere but lower. GPRO earnings have been volatile to say the least, but the last three quarters have seen improvements, but Q1, 2021 saw an EPS drop from $0.39 to $0.03; which has put the stock under pressure until Q2 earnings release in August. We favor sell on rally in the short to medium term horizons.

Disclaimer:
This article is for general information purpose only. It is not an investment advice or a solicitation to buy or sell any securities. Opinions expressed are of the authors and not necessarily of MFM Securities Limited or any of its affiliates, subsidiaries, officers or directors. Leveraged trading is high risk and not suitable for all. You could lose all of your deposited funds.
This member declared having a selling position on this financial instrument or a related financial instrument.

STATE OF THE MARKETS Stocks rally continues as Powell holds dovish line. US stocks continued their Monday’s rally, after…

The bullish trend is currently very strong on GOPRO INC.. As long as the price remains above the support at 8.17 USD, you… 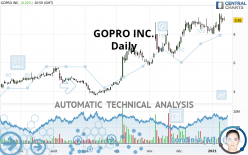