Related financial instrument : BITCOIN DIAMOND USD
The Bitcoin community is divided, and some forks have been much more publicized than others. If I say "Bitcoin Cash" or "Bitcoin Gold," does that mean anything to you? Certainly... And now if I say "Bitcoin Diamond", "Super Bitcoin" or "BitCore", do they mean anything to you as well? Not sure... Let's talk about the first cryptocurrency that I mentioned in the second question: Bitcoin Diamond
NB: the two other cryptocurrencies mentioned are going to be the subject of new articles later.

What is Bitcoin Diamond?

Bitcoin Diamond is a Bitcoin forkcreated at Block 495866 (24 November 2017). On this date precisely, all Bitcoin holders received free Bitcoin Diamond at a ratio of 1:10. This means that for every 1 BTC (Bitcoin) held ina wallet, investors received 10 BCD (Bitcoin Diamond) free of charge.
NB: the Airdrop ratio is different, but it's exactly the same as the launch of "Bitcoin Cash" and "Bitcoin Gold"...

Bitcoin clearly shows big problems of speed, confidentiality, and "scalability". These problems divide the developer community, which tends to launch their own cryptocurrency based on Bitcoin but including their improvements. With the Bitcoin Diamond, the BCD EVERY and 007 development teams met to launch a fork.
Bitcoin Diamond's stated an ultimate goal is to become "the best virtual coin", with no lack of privacy protection, no slowness in transaction confirmations, and no blockage for future developments. Bitcoin Diamond believes that with this fork they can provide better solutions to financial companies worldwide. 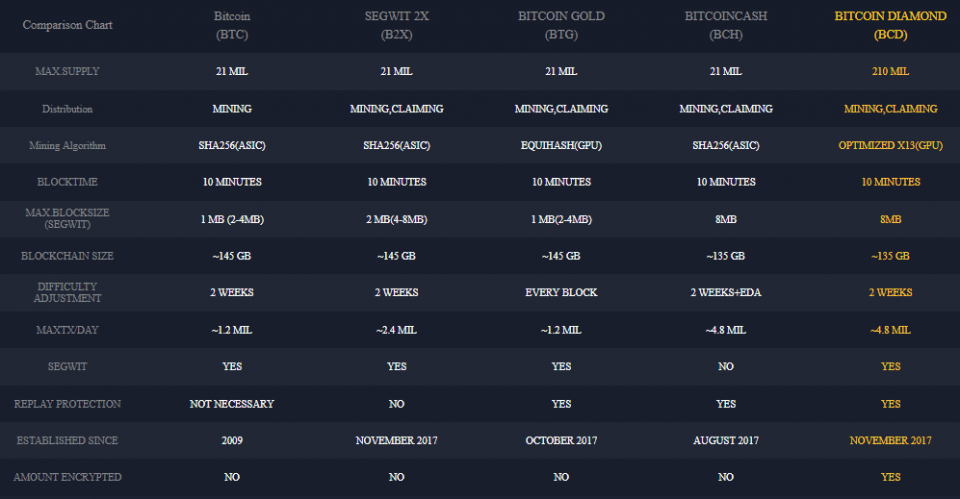 At the time of writing this article, Bitcoin Diamond is clearly at its lowest. I ask myself if the price will drop to zero. There are so many problems, misunderstandings, poor communication and rumours that the price hasn’t stopped falling.
My only questions at this stage of the article are the following: why didn’t Bitcoin Diamond rate 1/10 of Bitcoin’s value when it was released on 24 November 2017? But the same question is true of Bitcoin Cash and Bitcoin Gold (at a ratio of 1:1). And why was Bitcoin’s capitalization not diluted by this equivalence on 24 November 2017? Same with the other forks.

On which platforms can you buy Bitcoin Diamond?

Bitcoin Diamond has good coverage and is tradeable on more than 36 cryptocurrency trading platforms, the most well-known are: 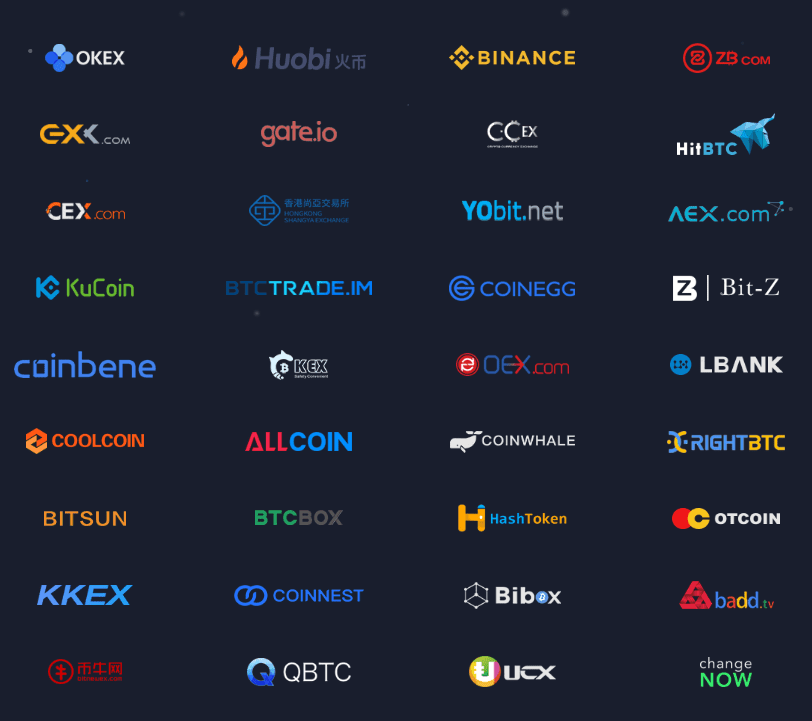 Bitcoin Diamond (BCD) generally only trades against Bitcoin (BTC) on all these trading platforms. To find Bitcoin Diamond, simply look for the BCD/BTC pair.

Can we arbitrate Bitcoin Diamond? 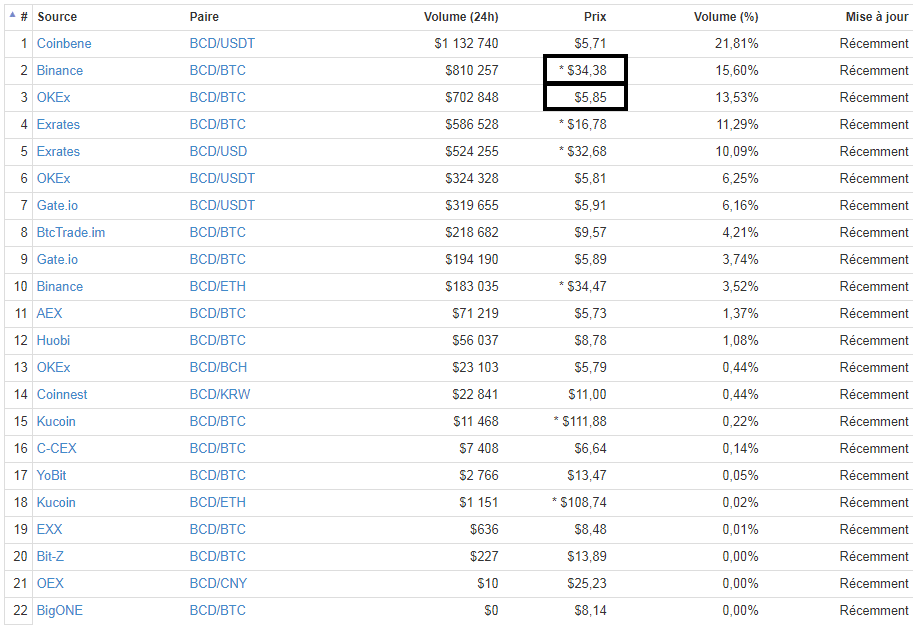 In this example, you could easily imagine being able to buy Bitcoin Diamond at $5.85 on the OKEx platform and sell them at $34.38 on the Binance platform.

Now let's look at the order books on these two platforms: 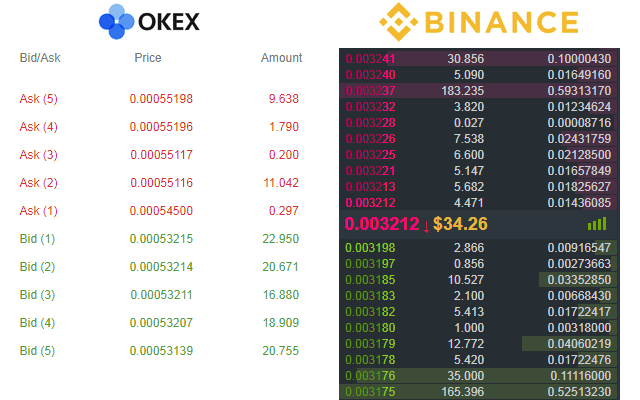 Now you're going to ask me: "But where is the catch “

As a result, you can only (at this stage) speculate on Bitcoin Diamond... And those who have bought it since 24 November 2017 have recorded one hell of a loss!

NB: I also suggest that you read this article -> Arbitrating cryptocurrencies

Bitcoin Diamond: is it a SCAM?

On YouTube and on the net, there are many investors defining Bitcoin Diamond as a SCAM.

An example of a video talking about the Bitcoin Diamond SCAM:

I can't tell you if Bitcoin Diamond is a SCAM or not, but the arguments don’t convince me that it's 100% certain that itis a SCAM, why? Let me explain.
The creators of the Bitcoin Diamond’s anonymity, or the ‘WHOIS’ for their site are not arguments. Bitcoin itself had an "anonymous" creator, whose identity is still not known. You should also know that Bitcoin Diamond also incorporates a layer of anonymity for transactions that Bitcoin doesn’t have.
There are still poorly administered and poorly moderated social networks. Yes, so what? If the developers don't have a "communication" team it could be "normal" that their Twitter/Facebook/other accounts are not very "professional".
I end up with the famous "source code". It would seem that this is now publicly available; To be seen with GitHub. This is not my department.
NB: where I agree with the investors who talk about a "SCAM" is on the mayhem of rates, the non-existence of serious wallets, and the disproportionate ambitions of the project.

My opinion of Bitcoin Diamond; Should you buy some?

The Bitcoin Diamond project seems to me to be a bit of a "rough draft". Lots of great points on paper, but are they really achievable? If achieved, will Bitcoin Diamond be used on a massive scale? Just because a cryptocurrency comes from a Bitcoin fork, without all the defects of Bitcoin, it doesn't mean that it will be accepted and used. Many cryptocurrencies present themselves as being much better to use than Bitcoin, but they are not used to any greater extent. Once again, King Bitcoin defends its throne, thanks to the masses.

Trading platforms said they would wait until the Bitcoin Diamond network was "stable" before allowing BCD deposits and withdrawals. But in a press release dated 1st February 2018, Bitcoin announced that its network was: 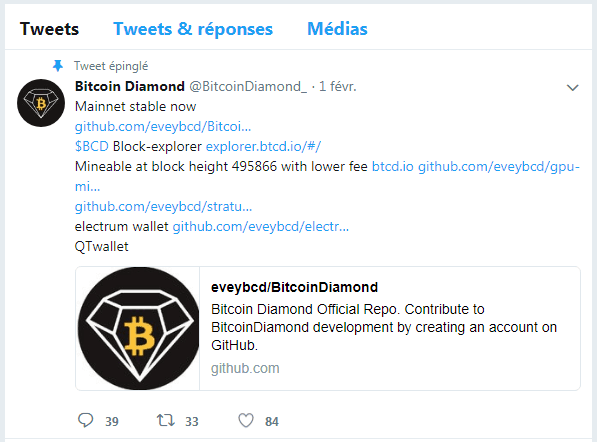 One month later, on 1st March 2018, BCD deposits/withdrawals were still not allowed.

Obviously, I will stay away from this cryptocurrency. Too many doubts. And too much mess for a cryptocurrency from King Bitcoin. Another question to ask at this stage is: "does being from a Bitcoin fork make Bitcoin Diamond better than a cryptocurrency?“ For me all this only tarnishes the image that BTC investors have and accelerates the impending death of Bitcoin.

So you're stubborn and you still want to buy it

If you are going to do it, compare prices. Bitcoin Diamond on Binance was available for $34 when this article was written but on other platforms they were available for $5 .

NB: if one day deposits/withdrawals open up on the trading platforms, I do not think that the price will stabilize at the higher price. No. I imagine it would be more mid-range between $5 and $34, once arbitrage stops.

Why become a member of CentralCharts?
Discover our guides
View all articles
1 free credit 1 free