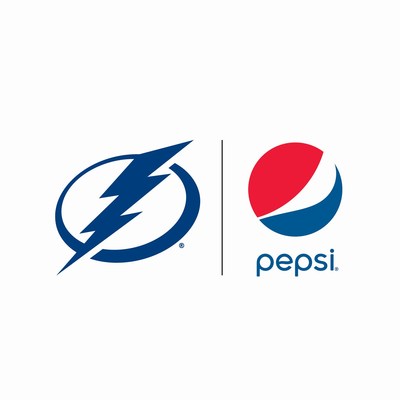 "We could not be more pleased to have PepsiCo Beverages North America join the Tampa Bay Lightning and AMALIE Arena as one of our championship level partners for the next seven years," said Griggs upon making the announcement. "We look forward to offering hockey fans and other arena guests the fantastic array of beverages produced by PepsiCo and we are excited about working together to market, activate and engage the Tampa Bay community through the joint strength and energy of our great brands."

Community elements in the partnership include the entitlement of one of the organization's 10 Lightning Made Street hockey rinks currently being constructed in Tampa Bay, sponsorship of the Bolt Run, scheduled this year for Sunday, October 27, and participation in the Lightning's flagship fundraising events, including Coop's Catch and the Bolts and Bulls golf tournament. In addition to community support, fan engaging experiential programs across hockey, eSports, and music will be launched in the initial year of the partnership.

"We're honored to join the Tampa Bay Lightning and AMALIE Arena family," said Derek Lewis, South Division President, PepsiCo Beverages North America. "The Tampa Bay Lightning organization is truly remarkable and a staple in the Tampa community and throughout Florida. We are excited to partner together to bring fans and consumers incredible experiences and memories across hockey, entertainment and gaming."

Signage and naming highlights in this new partnership include the entitlement of AMALIE Arena's west patio, the primary entrance used by arena guests to enter and exit the building, as well as static and digital signage throughout AMALIE Arena for Lightning games, concerts and events alike.

About PepsiCo:
PepsiCo products are enjoyed by consumers more than one billion times a day in more than 200 countries and territories around the world. PepsiCo generated more than $64 billion in net revenue in 2018, driven by a complementary food and beverage portfolio that includes Frito-Lay, Gatorade, Pepsi-Cola, Quaker and Tropicana. PepsiCo's product portfolio includes a wide range of enjoyable foods and beverages, including 22 brands that generate more than $1 billion each in estimated annual retail sales.

Guiding PepsiCo is our vision to Be the Global Leader in Convenient Foods and Beverages by Winning with Purpose. "Winning with Purpose" reflects our ambition to win sustainably in the marketplace and embed purpose into all aspects of the business. For more information, visit www.pepsico.com.

About Tampa Bay Sports and Entertainment, LLC:
Tampa Bay Sports and Entertainment, LLC (TBSE) is an entity established by Jeff Vinik in March 2010 to manage the National Hockey's League's Tampa Bay Lightning and the leasehold rights to AMALIE Arena, the 19,092-seat downtown Tampa home in which the team plays its games. The venue opened in 1996 and became AMALIE Arena in September 2014 when the family-owned, Tampa Bay-based AMALIE Oil Company elected to partner with Vinik and the Lightning. Since his purchase in 2010, Vinik has led a complete brand and business transformation of the Lightning and the arena, featuring a mostly private $85+ million-dollar renovation of the publicly owned facility. Vinik is also focused on elevating the Tampa Bay community, partnering with Cascade Investment, LLC on Water Street Tampa, a nearly 60-acre development in downtown Tampa.

&#39;The way the US withdrew from Afghanistan was disgraceful&#39; | DW interview with Hamid Karzai

Context Therapeutics reports a &#39;tremendous&#39; 2Q as it approaches first full-year as a listed company