U.S. Stocks
Are you looking for opportunities in American stocks?
DISCOVER LONDINIA OPPORTUNITIES...
STATE OF THE MARKETS
Stocks popped and dropped
. Major US indexes popped higher on the open Tuesday after the long weekend, only to drop and close mixed in tone. While Dow (+0.13%) and Russell (+1.14%) closed higher; Nasdaq (-0.09%) and S&P (-0.05%) settled lower as long term investors continued to take profits off the table. More than $123 billion worth of block orders flowed into the US bond futures as the 10Y benchmark hit 1.64% for the day.

Crude futures jumped to as high as $68.87/bl after reports showed that OPEC+ noted that demand has not been this high in years. The black gold settled around $67.93/bl as New York closed. On another note, gold was on offer, closed below $1900/oz, after news hit the wires that Feds might start discussing tapering in it’s June meeting.

The news on Fed’s tapering, sent Dollar to the helm of demand in the medium term accounts, while pushing Aussie and Kiwi back to the offered territory. Short term accounts were also seeing increased demand for Swiss, Yen and Dollar, while Sterling was sent to the back burner. Long term remains relatively unchanged.

OUR PICK – AT&T (T, NYSE)
Back into the business. When AT&T decided to stray away from its core business, we knew then it’s not gonna end well as in any companies that have tried that before. Telco married with media, Plantation married with banks, and many more over the decades. Telco is a boring business, so management thought adding entertainment would make it fun. Investors however don’t agree as the stock prices fell from around $34 to $27 in a few months after AT&T bought Time Warner for $85 billion. Now after three years, AT&T realized it’s better off by focusing on its core business; especially post Covid where demand for bandwidth is higher than ever. We see AT&T remains on firm bid above $28 as we have foresaw in late January.

Disclaimer:
This article is for general information purpose only. It is not an investment advice or a solicitation to buy or sell any securities. Opinions expressed are of the authors and not necessarily of MFM Securities Limited or any of its affiliates, subsidiaries, officers or directors. Leveraged trading is high risk and not suitable for all. You could lose all of your deposited funds.
This member declared having a buying position on this financial instrument or a related financial instrument.

We are currently in a phase of short-term indecision. In a case like this, you could favour trades in the direction of the… 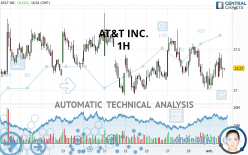 A bullish trend on AT&T INC. both in substance and in the short term. A purchase could be considered as long as the price…

The basic trend is very bearish on AT&T INC. but buyers need to catch their breath in the short term. In a case like… 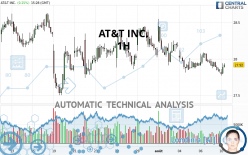