In the short term, we can see an acceleration in the bearish trend on HAMBURG.HAFEN LOG.A-SP NA, which is a positive signal… 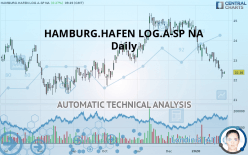